On Saturday, September 11, 2021, the Fort Walton Beach Police Department, along with many other public safety partners, will host an emergency/first responder vehicle procession and commemoration ceremony in honor of our fallen heroes of the September 11, 2001, terrorist attacks. This year marks the 20th anniversary of the tragic event.

“May we never forget. This rings true each day and even more so as we approach the 20-year anniversary of the terrorist attacks on American soil,” said Fort Walton Beach Police Chief Robert Bage. “Our department, along with our area first responder partners, have put together a fitting ceremony to honor the first responders who lost their lives on September 11, 2001. We invite everyone to witness and be a part of this solemn event, and to help us honor those who made the ultimate sacrifice for their fellow Americans.”

The ceremony will include: 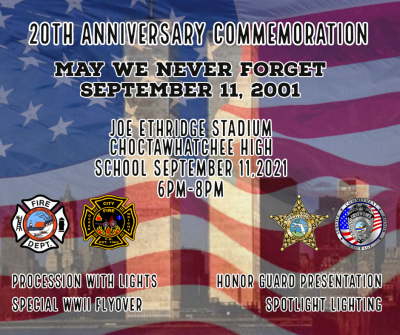